Each year, approximately 9,000 adult Norwegians fracture a hip and 15,000 fracture a wrist. Many people also experience vertebral fractures. Oslo women have the highest risk of hip fractures in the world. Osteoporosis is an important contributory factor to fractures in the elderly.

Each year, approximately 9,000 adult Norwegians fracture a hip and 15,000 fracture a wrist. Many people also experience vertebral fractures. Oslo women have the highest risk of hip fractures in the world. Osteoporosis is an important contributory factor to fractures in the elderly.

A gradual decrease in bone mass is part of the ageing process.

With osteoporosis, bone mass is reduced to a level below a defined threshold. Bone mass may have declined faster than normal, or one may have had a lower than usual bone mass before the bone loss starts. Osteoporosis may also occur as a consequence of certain diseases or the use of certain drugs.

Osteoporosis involves an impairment of the bone's structure so bone tissue becomes more porous. This weakness is a risk condition and gives no symptoms before a fracture occurs.

The hip, forearm and spine (vertebrae) are the most common fracture sites.

Based on bone density measurements, an estimated 240,000-300,000 Norwegians have osteoporosis. The proportion will vary somewhat depending on in which part of the body the bone density is measured. There are more osteoporosis and fractures in cities and urban areas than in rural areas (Meyer 2004; Omsland 2011; Søgaard 2007).

Hip fractures are the most serious consequence of osteoporosis. Most fractures in the elderly happen due to decreased bone mass combined with a fall.

In Norway, approximately 9,000 adults suffer a hip fracture each year (Omsland, 2012). This equates to one hip fracture per hour. Seven out of ten hip fractures affect women. The risk of fracture increases sharply from about 70 years of age, see Figure 1.

Hip fractures usually occur in or just below the femoral neck.

A similar decreasing trend is also seen in other countries. 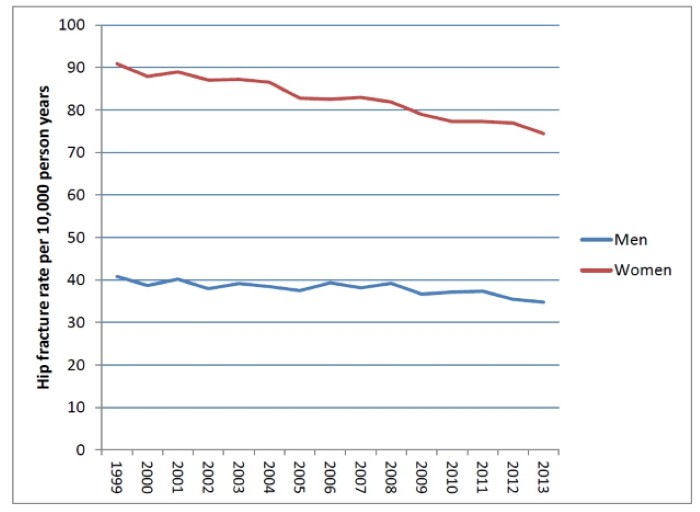 Higher risk of fracture in Oslo than in Sogn og Fjordane

In Oslo, approximately every other woman and every fourth man will suffer at least one fracture in the hip, forearm, upper arm or spine after 50 years of age. Data from the late 1980s showed that the risk of hip fracture was 50 per cent higher in Oslo than in Sogn and Fjordane and Nord-Trøndelag.

A study of Nord-Trøndelag and Tromsø showed that women who were 65 years or older and lived in the city had a 30 per cent greater risk of wrist fracture compared with women living in rural areas. A higher body mass index in the rural areas could explain part of the difference in fracture risk (Omsland, 2011).

In a 2004 report, the WHO European Office stated that about 30 per cent of people aged over 65 have falls each year. Falls are even more frequent in the over-75 age group. In a Norwegian study, 307 women aged 75 years and older (average 81 years) living at home in Oslo were observed for one year. Approximately 50 per cent of the women reported that they had fallen once or more during the year, and 13 per cent of the falls had resulted in a fracture (Bergland, 2004).

Smoking, physical activity, weight More than half of all hip fractures can be explained by factors such as smoking, low physical activity and low body weight, according to a European study (Johnell, 1995). Other factors also play a role, see the table below.

The following table provides an overview of risk factors for osteoporosis and / or fracture.

Bone density measurements are used to identify individuals who may benefit from medicines or other specific fracture preventive measures. People belonging to the following three risk groups should have their bone mineral density measured (Ministry of Health and Care Services, 2006):

Variations in the availability of bone densitometry machines can contribute to geographical differences in osteoporosis diagnosis.

Preventive treatment of osteoporosis and fractures

There are available effective drugs for reducing the risk of subsequent fracture among people who have osteoporosis. In addition, a combined supplement of calcium and vitamin D is recommended alongside all medical treatment for fracture prevention. Bisphosphonates, denosumab, oestrogen receptor modulators (SERM) or parathormon are used. Oestrogen treatment increases bone density and reduces fractures, but this is no longer the first choice treatment as it may increase the risk of other diseases over several years.

A Norwegian study showed that only 17 per cent of women and 5 per cent of men with hip fractures in 2003/04 received anti-osteoporosis drugs during the following year (Devold, 2012). This is remarkable since these patients are at high risk for new fractures and treatment can clearly reduce these risks. The study is based on a linkage between the nationwide Norwegian Prescription Database and a database including all those admitted to Norwegian hospitals with a hip fracture diagnosis during the period.

Hip protectors can prevent hip fractures among the elderly living in nursing homes.

Other lifestyle modifications that may help prevent fractures are also recommended - the see right-hand column of the table above.

Wrist fractures are usually treated without surgery. Vertebral fractures are treated with pain medication, bed rest during the first days and physiotherapy. Some of those who have severe pain may need to be admitted to hospital.

Patients with hip fractures are almost always admitted to hospital for surgery. Although many recover after a hip fracture, a considerable proportion has permanently impaired function and needs an increased level of care.

A study from Oslo in 1996-1997 showed that six percent of community-dwelling hip fracture patients under 75 years and 33 percent of patients over 85 years had to move to a nursing home after a hip fracture. Half of those who could walk unaided before the fracture lost this ability.

In the first year after a hip fracture, there is up to 20 per cent mortality among patients, many due to poor health before the fracture.  A report from the Knowledge Centre for the Health Services showed that mortality during the first 30 days after admission for hip fracture also varies between hospitals.

In 2014, a report estimated the cost associated with hip fractures among people over 70 living at home. In the first year, the average cost was 500,000 Norwegian kroner. For those who survive the first two years, the total cost is 800,000-1,000,00 kroner.  Hip fractures are estimated to cost society 7-9 billion kroner per year (Hektoen, 2014). Patients in nursing homes are not included in these figures.

The Norwegian Directorate of Health established a National Action Plan (2005) and National Guidelines for Prevention and Treatment of Osteoporosis and Osteoporotic fracture (2006).

Studies from other countries in the Nordic region, Western Europe and North America show that the incidence of hip fractures has declined since 1990, especially among women. Both Denmark and Finland reported a 20 per cent decline in women around the millennium, while the decline among men is higher in Denmark than in Finland; 20 compared with 6 per cent (Omsland 2012).

Together with the other Scandinavian countries, Norway is on top of the world’s list when it comes to hip fractures in women, see figure. Most hip fractures happen indoors at home, thus icy pavements are not the culprit. However, there is seasonal variation in forearm fractures, with more occurring in winter.

The cause of the high fracture incidence in Norway is largely unknown. Other possible explanations could be that Norwegian women are generally taller and have a lower body weight compared to women from other countries, although this is by far not the sole reason.

This fact sheet was reviewed in October 2016.