Most people know that lifestyle and mental health can affect their brain health, although women and people with higher education are most aware. These are the findings of the largest global survey ever done to investigate public perceptions of brain health by researchers from the Lifebrain consortium

Most people know that lifestyle and mental health can affect their brain health, although women and people with higher education are most aware. These are the findings of the largest global survey ever done to investigate public perceptions of brain health by researchers from the Lifebrain consortium

Over 27 500 people answered the Global Brain Health Survey, developed by researchers at the Norwegian Institute of Public Health and the University of Oslo, as part of the Lifebrain project.

The respondents answered questions about the factors they think influence brain health, during which life periods they consider it most important to look after their brain, and which diseases and disorders they associate with it.

Brain health is a relatively new concept encompassing mental and cognitive health. It includes mental well-being and the ability to remember, learn, plan and concentrate. 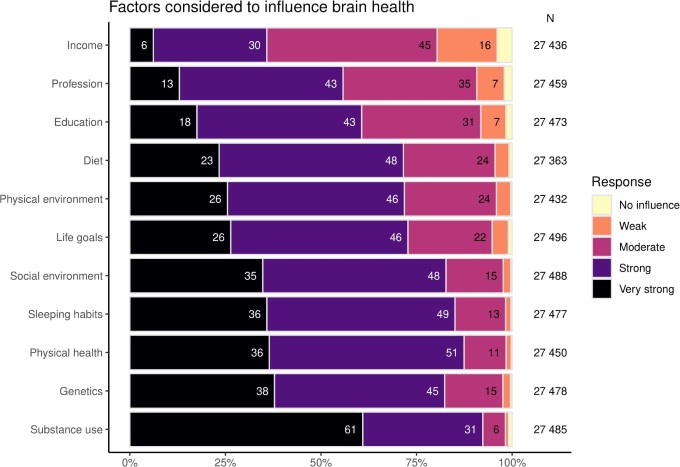 “It is very positive that people are aware that lifestyle factors can influence their brain health,” says Dr. Isabelle Budin-Ljøsne from the Norwegian Institute of Public Health, lead author of the survey.

This  supports current scientific research, which finds certain lifestyle factors are associated with lower risk of developing brain disease, such as being physically active, eating healthily, getting enough sleep, reducing and/or limiting negative stress, and refraining from substance use such as alcohol, smoking or illicit drugs.

Fewer respondents (below 60%) recognised the influence of socioeconomic factors on brain health.

“We still do not know much about how factors such as education and profession influence brain health, although poverty can increase the risk of mental health issues, and therefore also impact brain health,“ says Dr. Budin-Ljøsne.

All stages of life are important

“Taking care of the foetal brain during pregnancy is particularly important as the brain quickly develops during that period and needs to grow healthily,” says Budin-Ljøsne.

“It is very interesting that our respondents so clearly made the connection between brain health and mental health, which  supports current scientific knowledge. This may indicate that more attention should be given by policymakers to address preventable mental health risk factors in populations.”

Fewer respondents (less than 30%) associated cancer, hypertension, diabetes and arthritis with the brain.

“Whilst these disorders are not defined as brain diseases, they still impact the brain, so it is important that public health actors educate the public about what brain health actually is. A simple message for connecting cardiovascular health with the brain is to explain that “what is good for the heart is good for the brain”.”

About the Global Brain Health Survey

These results were based on answers from 27,590 subjects from 81 countries (mostly in Europe) who responded to an online questionnaire in the Global Brain Health Survey. The majority of respondents were women and highly educated and were likely to be interested in brain health and were therefore not representative of the general population.  We expect that other groups of people might not be so knowledgeable and might need targeted information about brain health.

The online survey was available in 14 languages, including French, Spanish, Dutch, Hungarian, German, Italian, and Scandinavian languages, between June 2019 - August 2020.

The Global Brain Health Survey is part of the Lifebrain project led by the University of Oslo, in collaboration with the Norwegian Institute of Public Health.

More results from the survey have been presented previously: