Hopp til innhold
Frontpage News by year 2022 What motivates people to look after their brain health?

Get alerts of updates about «What motivates people to look after their brain health?»

What motivates people to look after their brain health?

The prospect of experiencing symptoms of cognitive or mental decline is a key motivation to undertake lifestyle changes for better brain health, according to the second public report from the Lifebrain consortium in collaboration with the Norwegian Institute of Public Health.

The prospect of experiencing symptoms of cognitive or mental decline is a key motivation to undertake lifestyle changes for better brain health, according to the second public report from the Lifebrain consortium in collaboration with the Norwegian Institute of Public Health.

The report is based on 27 500 responses in the Global Brain Health Survey, and provides insight into factors motivating people to look after their brain.

7 of 10 respondents said they would be motivated to change their lifestyle if they noticed problems with their brain health, such as if their memory deteriorated.

“The challenge with this is that it might be a bit late to start making lifestyle changes once symptoms appear. Taking care of the brain is a lifelong endeavour, the earlier people adopt healthy behaviours for their brain health, the better”, says Dr. Isabelle Budin-Ljøsne from the Norwegian Institute of Public Health, lead author of the global brain health survey and author of the report.

Only a third of respondents would be motivated to make lifestyle changes if confronted with a brain disease diagnosis.

“This suggests that people might perceive lifestyle factors as irrelevant once a diagnosis is set and several signs of the disease are obvious” says Budin-Ljøsne.

"People need assurance that changing their lifestyle is worth the effort” says Budin-Ljøsne.

One UK respondent put it like this: “If only there was some good information on the size of the impact a change would make. We all know healthy lifestyle etc. improves health but mostly what stops us doing more is not knowing how much of an impact it has. It might be years of additional exercise for possibility of a small gain”.

Motivations to make lifestyle changes varied across sociodemographic and individual characteristics. Our results suggest that it may be harder to convince elderly people (> 60 years of age) to change habits than young people (< 40 years of age).

Young respondents were more willing to change lifestyle than older respondents, but were more likely to be prevented by lack of time and motivation, or if the changes were expensive.

People are willing to do more for their brain health

Around half of respondents already frequently engaged in favourable behaviour for their brain health such as getting enough sleep, eating a healthy diet and exercising (see figure). 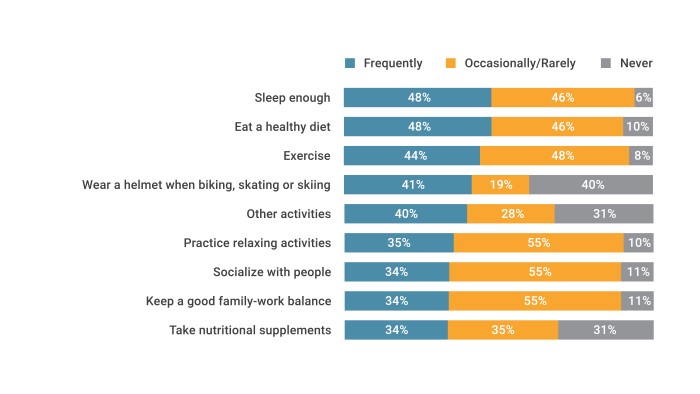 Figure: This is what people do for their brain health. Based on 27 500 answers from the Global Brain Health Survey (Lifebrain)

About the Global Brain Health Survey

The report is based on answers from 27,590 subjects from 81 countries (predominantly in Europe) who responded on questions via Internet in the Global Brain Health Survey:

The online survey was available in 14 languages, including French, Spanish, Dutch, Hungarian, German, Italian, and Scandinavian languages, between June 2019 - August 2020.

Lifebrain has previously published a report on what health authorities can do to improve the brain health of the population (the first Lifebrain report: «How to promote citizens’ brain health?»).