Get alerts of updates about «Work and health»

Work can be a source of social relationships, identity, personal growth and financial security, and thereby health-promoting. Yet factors at the workplace can also be a cause of health problems, through injury and psychosocial risk in the working environment.

Work can be a source of social relationships, identity, personal growth and financial security, and thereby health-promoting. Yet factors at the workplace can also be a cause of health problems, through injury and psychosocial risk in the working environment.

For most adults, work is a major part of life. On average, those who work have better health than those outside the workforce. Poor health can exclude people from the workforce and those with significant health problems may encounter more obstacles when trying to find work (i.e. due to “selection”).

In Norway, there is broad consensus that participation in working life should be possible for as many people as possible (Dahl, 2014). Most adults are registered in the workforce.

The workforce consists of all employed and unemployed persons in the 15-74 year age group. They may have shorter and longer periods of unemployment, for example due to dismissal or health problems.

Figure 1 shows the percentage of medically-certified sickness benefits issued for the period 2007-2016. This was 5.4 per cent in the third quarter of 2016.

Most medically-certified sickness benefits and long-term benefits are given for musculoskeletal disorders and mental health disorders such as anxiety and depression.

The reasons why people are not working are many and complex:

The proportion in employment, the number of people on sick leave and the proportion receiving disability benefits varies over time. Abrupt variations are mainly related to structural changes.

Over time, there has been an increase in the number receiving disability benefits, especially among young people.

As TU was specifically targeted towards young people, there has been a period where more young people are receiving disability benefits than with the old scheme (NAV, 2016).

Differences in the population

Sick leave increased with age for both men and women.

There are socioeconomic differences in sick leave and disability benefits.

Employment levels in Norway are among the highest in OECD countries, for all age groups and both genders (OECD, 2014). See Figure 3. 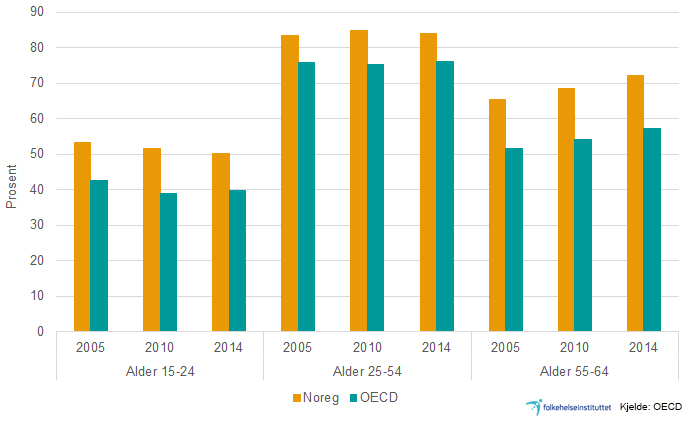 There is a substantial variation in how different European countries organise working life. Compared with the general standard in Europe, a higher proportion are in employed in the public sector in Norway, more have permanent employment contracts, protection against dismissal and full pay during sick leave.

Problems linked to unemployment are related to how long unemployment has lasted. Good welfare programs function as a safety net that reduces the risk of unemployment impairing mental health (Ferrarini, 2014).

However, the picture is complicated: it has also been shown that the transition from unemployment to work can be associated with mental health problems, if the working environment is unfavourable. Several studies show that psychosocial and organisational factors in the workplace are linked to the mental health of employees (Finne, 2014; Johannessen, 2013; Stansfeld, 2006).

Work as a health-promoting factor

Primarily, work provides financial security. When the working environment is satisfactory, work in itself may also be beneficial to health.

However, studies that have examined whether the transition from working life to retirement if of significance for health, report diverse findings (Wang, 2011). Retirement can contribute to good health if the job is stressful (Westerlund, 2009). This example emphasises how the relationship between health and work is complex.

The workplace can also be a source of injury, disease and health problems. Many of these factors are related to the risk of sick leave and disability benefits (Aagestad, 2014; Foss, 2011; Labriola, 2009; Stattin, 2005; Sterud, 2013a, 2014b; Wang, 2014). STAMI has recently reviewed the knowledge status of work environment factors that contribute to sick leave (Knardahl, 2016).

Workplace accidents often affect young employees and can have major consequences for their lives.

Since the majority of workers are in employment, the workplace is also an important arena for preventive work through social impact and the employer’s HSE work (White Paper no. 19, 2014). The Inclusive Labour Agreement (IA) 2014-2018 and the Public Health Report (White Paper no. 19, 2014) have also focused on the workplace as an arena for prevention to a greater degree than before.

There is reason to believe that low unemployment, high occupational participation and reduced risk in the working environment promote public health.

Continuous efforts are being made to identify health risks at workplaces, through both advice and supervision from the Labour Inspectorate. The Working Environment Act decrees this work and employers, employees, company health service and supervisory authorities are obliged to contribute.

There is no single relationship between health problems and labour participation. Factors linked to both health and work can influence whether an employee with health problems stops working or not.

Knowledge of the occupational health challenges faced in specific occupations, industries or businesses form the basis for effective preventive activities. There is still a need to develop more and better knowledge of what affects the workplace and sick leave (Odeen, 2013) and how we can improve the prevention of health problems developing at the workplace (van Oostrom, 2009).

In addition to the primary preventive work, good and effective measures are also needed for those who become ill and have difficulties working. For example, working life is one of the most important arenas for the prevention of harmful alcohol consumption (Ames, 2011).

For those who are unemployed, it is important to have good, effective welfare systems to reduce the burden of being outside the workforce (Ferrarini, 2014).

Text: Simon Øverland and Jens Christoffer Skogen at the Norwegian Institute of Public Health. We would like to thank the National Institute of Occupational Health (STAMI) for proof-reading and contributions to this chapter.