Get alerts of updates about «Research»

Research in the Centre for Fertility and Health

Our scientific goal is to greatly advance the understanding how changes in patterns of fertility and family structure influence child and adult health through social and biological pathways.

Our scientific goal is to greatly advance the understanding how changes in patterns of fertility and family structure influence child and adult health through social and biological pathways.

The Centre for Fertility and Health is a Centre of Excellence (SFF) at the Norwegian Institute of Public Health funded by the Research Council of Norway.

Health implications of changes in patterns of fertility and family structure

In the last few decades we have witnessed marked changes in patterns of fertility and family structure in rich countries. These include increasing age at childbirth, a lower number of children born to each woman or man, greater use of assisted reproductive technology (ART), higher frequency of family disruptions and increasingly complex family structures.

Elucidation of the complex biological and social causal mechanisms requires broad expertise. The multidisciplinary research team at Centre for Fertility and Health consists of epidemiologists, geneticists, demographers, sociologists and economists from Norway and abroad. Our research can be described in five integrated themes of research. Most of our research projects and activities cut across several research themes.

Parental age at first birth is increasing in most countries. For example, in Norway the mean age of mothers at first birth has increased from 23.3 years in 1970 to 29.0 years in 2016. The mean age of men at first birth has also increased. At the same time, the total number of children born to each woman has declined across the world, and not only because of the later entry into motherhood. If we consider the development from a the perspective of the child, the average age of the child’s parents at the time of birth has typically increased. One of Centre’s goals is to add to the knowledge about how a higher maternal and paternal age affect pregnancy outcomes and children’s health, through social and biological mechanisms. 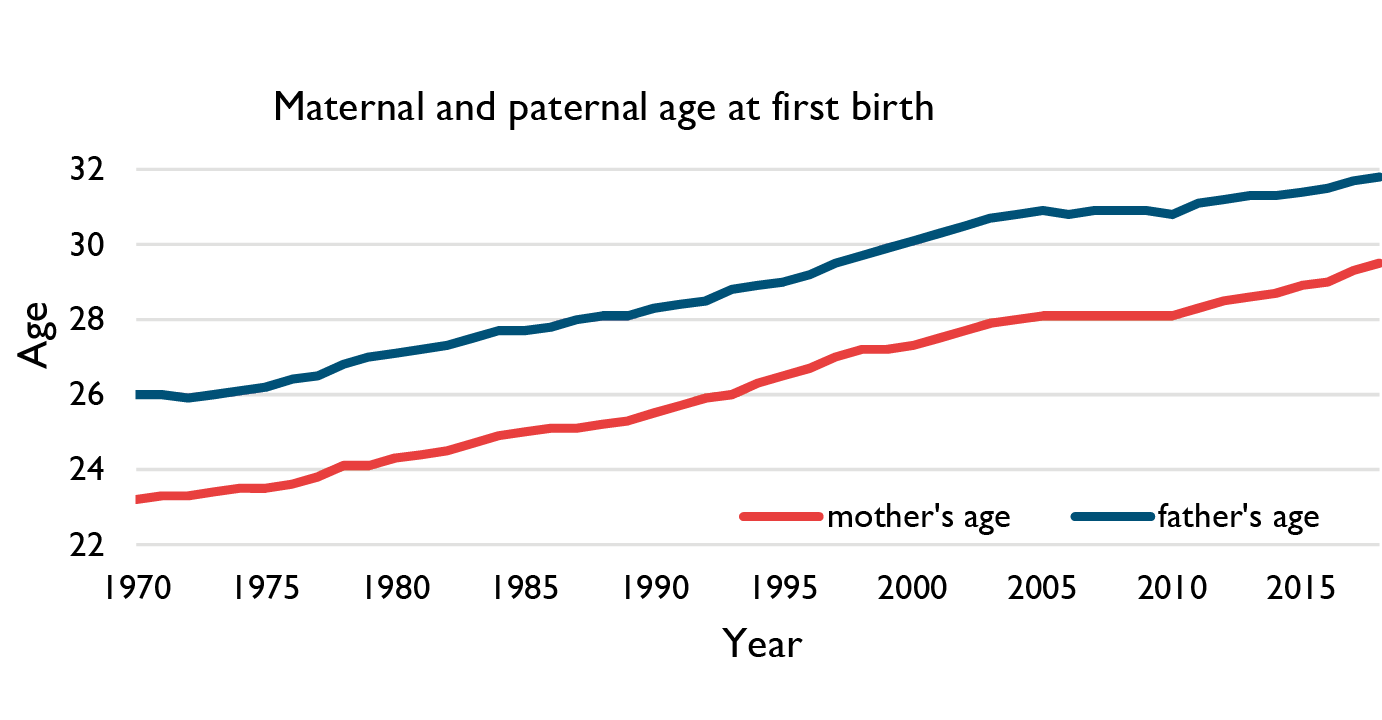 Norway is an excellent venue to study this because trends are similar to those observed elsewhere in richer countries, and unique data collected in Norway enables detailed long-term prospective studies.

One of several possible biological mechanisms involves telomere biology. Our research on this topic is presented briefly below. The social pathways are also diverse. For example, one reason why parental age may affect child health is that older parents are likely to have more economic resources to spend on their children. They may also have accumulated more knowledge and may be more mature. On the other hand, they are less likely to survive until the child reaches adulthood. Another issue, addressed under theme 3, is that the age when a person becomes a parent (for the first time) has implications for his or her own health – through both biological and social pathways.

As mothers’ and fathers’ age at first birth have increased, we have also witnessed increased fecundity problems in the population. There has been a steady increase in the use of assisted reproductive technology (ART) since its introduction in Norway in 1984. Because the total number of births per woman has also decreased, the proportion of children conceived in this way has increased. Today, around 2500 children are born in Norway each year through ART, which is about 4% of all births, and around 7 million children have been born through ART worldwide.  Moreover, as in other countries, there has been an increase in childlessness in Norway, from 10% in 1985 to 13% in 2015 for women and much more pronounced in men, from 14% 1985 to 23% in 2015. 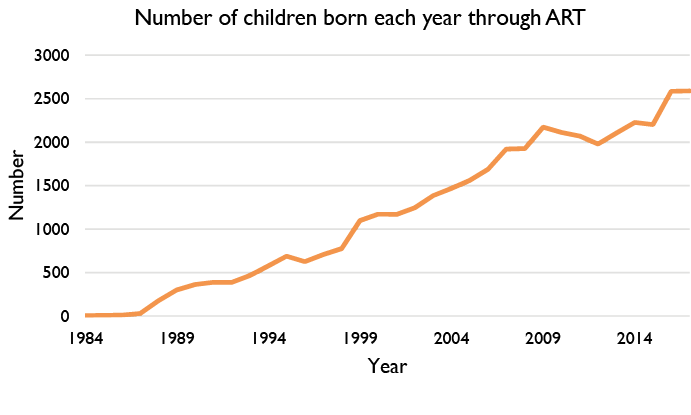 The figure shows the number of children born through ART in Norway from 1984 to 2018. Source: Statistics Norway

Whilst most mothers treated with ART and children born through ART are healthy, there is some evidence pointing to adverse effects. ART has been associated with adverse pregnancy outcomes and increased risk of congenital malformations, infant morbidity and mortality. ART is also associated with several childhood diseases as well as cardiovascular diseases and cancer in mothers. One proposed mechanism for the detrimental effects of ART procedures is epigenetic modifications of the DNA during gametogenesis, fertilisation, and early embryonic development. However, it is not clear whether the observed adverse effects of ART are caused by the procedure itself or if it is caused by the underlying subfertility itself or higher age of the mother.

We will estimate short and long-term health consequences of ART for women and offspring using a combination of data from registers, cohorts and biological samples. In particular, we are interested in health consequences of subfertility in women and men, and will examine epigenetic changes induced by ART, and determine their possible roles in diseases.

As age at first birth has increased and the number of children born to each woman has decreased over the past decades, more people are ending up childless. Additionally, there have been marked changes in marriage, divorce and cohabitation patterns over the last half century: The age at marriage and the proportion of people who never marry have increased, while divorce rates have escalated. Couples living together in consensual unions have largely compensated for this shift away from marriage, but these unions are much more unstable. In combination with an increase in the proportion of children born outside of marriage, and most commonly to cohabiting parents, these patterns and trends in partnership instability have led to a sharp rise in the proportion or children who experience parental disruption. For example, 39% of 17-year old children in 2015 did not live with both their parents. Because many parents form new partnerships after disruption, and often have children in these partnerships, families are becoming more and more complex.

The changes in marriage, divorce, cohabitation and family structure have been influenced by (and contributed to) the fertility changes, and the two sets of changes have also been driven by many of the same forces. Because of this close relationship between fertility and family behaviour, it is reasonable to take both into account in studies of health implications.

Our goal is to contribute to better understanding of how the number of children, age at first birth, length of birth intervals, and partnership disruptions affect the health of parents, and how the number of siblings, birth interval lengths and parental disruption affect offspring health. The reproductive factors may affect the parents’ health through both biological mechanisms (linked to physiological processes during pregnancy or lactation) and social pathways. As examples of social pathways, the number of children likely affects a person’s lifestyle and may be important for access to support in old age, whereas early entry into parenthood may disrupt education or work careers, with later implications for health. Comparisons between fertility-health associations among women and men shed light on the relative importance of biological and social mechanisms.

The figure illustrates some of the many interdisciplinary links in the use of statistical analyses.

Our research projects employ numerous statistical analysis strategies where we contribute actively to the methods development.

Health factors can be transmitted to subsequent generations in several ways. First, certain characteristics of the parents that are important for their own health, such as their socioeconomic resources, lifestyles and attitudes may be passed on to their children through various types of “social transmission”. Second, a trait from the parents can be inherited through genes. Third, the parents’ health may affect the daily life in the home, their ability to care for the children, and the children’s education and income, all of which in turn may be important for the children’s health.

You can read more about our research themes in our annual report for 2018.

We make use of the unique Norwegian infrastructure of registries, cohorts and biobanks. The nationwide registries in Norway and other Nordic countries have been extensively used for medical and social science research. At the Centre for Fertility and Health we will take a long step beyond the current practice by integrating information from a large number of different registries with additional linkages to several surveys and cohort studies.